Since its founding in 1949, the Stella Adler Studio of Acting has trained thousands of actors, many of whom have gone on to important theater and film careers. Its roots, however, go back even farther, to Jacob P. Adler, one of the great actors of the American Yiddish Theatre, and also include Harold Clurman, Stella’s second husband and co-founder of the Group Theatre. In 1972, the Stella Adler Studio of Acting became the first professional actor training school to become affiliated with NYU’s Tisch School of the Arts. The spirit that has animated the Adler family for more than 100 years stems from the insight that growth as an actor and growth as a human being are synonymous. The studio’s mission is to create an environment with the purpose of nurturing theater artists and audiences who value humanity, their own and others, as their first and most precious priority while providing art and education to the greater community. In addition to the world-class professional training, the studio has evolved into one of the most culturally rich environments in New York City through its cultural center programming.

The scope of the school’s current activities can be summarized in three categories:

The Stella Adler Studio upholds a unique focus in American actor training. Like Jacob, Stella and Harold, the studio affirms that the primary function of theater is to uplift humanity. A successful student for Stella is not necessarily one who becomes famous or rich, but one who connects to their deeper self and to our shared humanity. The school is a cultural center determined to train actors and support artists not despite, but in the face of a world in crisis. Programs like the Outreach Division help to create an environment for all students to become actors like Stella and those in the Group Theater: actors who are socially and consciously aware and whose awareness contributes to their ability to act passionately.

The need of a young actor to act is stronger than an intelligent nonprofessional can comprehend. The world may think that an actor’s ambition is focused on an appetite for money, success, and fame. Even those actors who admit to these aims tell only part of the story. The theatre is different from most other professions because it requires its dedicated practitioners to struggle toward a brutally honest, creative way of life.

All tangible professions that are recognized and understood are good, but they tend to be too confining for an actor’s chaotic psyche. Once channeled in the theatre and through acting, the actor quickly realizes the unlimited powers of imagination. A blossoming of emotional range follows this realization. Plays are no longer read for amusement; they are studied to learn about life. The world is no longer an occasional space for vicarious being; it is a constant staging area for vital engagement. The actor ceases to be an observer on the fringe of life but feels permission to investigate, audaciously, life’s every nook and cranny.

Everyday reality is no longer enough for the actor. Only an art form will do to express the reality of life. Even if you take the physical staging platform away, the actor will grow for the tools, training, and discipline are there.

To grow, by the way, is the deepest and truest need of any human being who says, 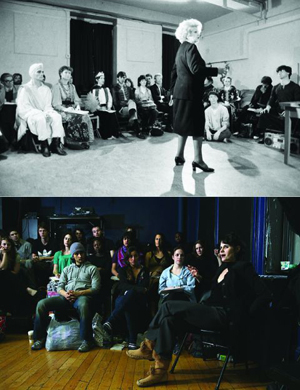