Audition Required. For tuition and application information, contact NYU’s Undergraduate Drama Department at 212.998.1850. In 1969, The Stella Adler Studio of Acting became the first professional training school affiliated with New York University’s Tisch School of the Arts Undergraduate Drama Department. The program has continued since, leading students to a Bachelor of Fine Arts degree, combining academic studies at New York University with professional training at the Studio. This is a four year training program.

The First Year and Second Year

The first and second year of the program focus on providing students with a foundation from which to grow through a firm acting technique, voice and speech work, movement and physical exploration as well as contemporary and classical scene work. Students will develop a facile responsive body, a strong and clear voice, and clear understanding of the Adler Technique.

Students also partake in a Classical Intensive, which includes masterclasses in Voice with Andrew Wade, former Head of Voice at The Royal Shakespeare Company, Stage Combat with J Steven White, one of the most respected fight choreographers in recent history and Classical Scene Study with James Tripp, currently in his 17th year as the Head of Acting of Stella Adler Studio. Students will also begin exploring audition techniques. During the year, special workshops are often arranged with professionals such as, Benicio Del Toro, Matthew Modine, Frank Langella, and Alfred Molina.

In the fourth year, known as the Company, students devote most of their studio time to rehearsal and performance.  The Company is a bridge between training and the performance experiences young actors are likely to encounter in the professional world, and includes a 7-week tour to schools, prisons and community centers, giving students the opportunity to work on a role over an extended number of performances, to perform in different venues, and to bring theater to a wide variety of audiences. Each production is supported by a movement coach, voice coach, and acting panel, and is directed by industry professionals. Students participate in industry meetings and have the opportunity to audition for the showcase. Students also have a class on preparing for the acting profession with Casting Director Todd Thaler. 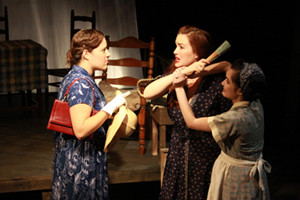