In the fall and spring, the studio offers a conservatory program for teens on Saturdays. This all-day intensive is structured to suit both the beginning and professional young actor, and is designed to introduce the acting technique developed by Stella Adler. As with all of the Studio’s programs, the Teen Conservatory is informed by the insight that growth as an actor and growth as a human being are synonymous. Young people are therefore acquainted not only with core elements of actor training but with the artistic, cultural and humanistic values that support a life in the theater.

Schedule an interview for the Weekend Teen Conservatory by calling 212-689-0087.
Please take a moment to view our Teen Programs Video.
Read about our Teen Alumni Success!

Admission to the Teen Weekend Conservatory program is by entrance interview with the Director of Teen Programs. Applicants must be 14-17 years of age, and must call the studio at 212-689-0087 to schedule an interview appointment.

*NOTICE* Applications must be reviewed and signed by the teen’s guardian.

Spring Session: February 6 – April 16, 2016 – NOW AUDITIONING
8 WEEKS, $700
Satudays, 10:00am – 1:00pm
This course will teach the teen acting students the different requirements necessary for giving a fully realized performance for camera vs. stage. The class will cover the many current styles of film and television such as: episodic, sitcoms, one hour drama, feature film and under 5’s. Scripts from current television and feature films will be used. Students will learn the process of rehearsing and shooting on set from the actor’s perspective.
Instructor: Judson Jones

8 WEEKS, $825
Fall Session: September 27 – November 15, 2015
SATURDAYS, 10:00AM – 1:00PM
This class will comprehensively prepare the current high school senior or junior theatre student for the rigorous demands of the application and audition process for BFA theatre programs. This class combines the structure of a group class with the intimacy and personal attention of private coaching. Students will leave the class with polished audition material and fully prepared to audition for BFA programs.
Instructor: Tom Pacio

ADVANCED TECHNIQUE WORKSHOP with Alice Saltzman (offered in Fall only)

8 WEEKS, Price $685
Fall Session: September 27 – November 15, 2015
SATURDAYS, 2:00pm – 5:00pm
This advanced workshop is a deeper investigation of the concepts introduced in Acting Technique, exploring the language and principles of Stella Adler’s approach to acting including: imagination, action, circumstance, and justification. Students will strengthen what they have learned in Acting Technique through advanced exercises from which to build themselves as actors as well as human beings.
Instructor: Alice Saltzman, Associate Head of Acting

TOM PACIO has been the Education Director for the Powerhouse Theater Training Program at Vassar College since 2007. From 2010-2014 he was the Industry Practicum Director/Acting Faculty at the CAP21 Musical Theatre Conservatory. Directing credits include, On the Town (CAP21), devised musicals Looking for Someone and Sympathetic Frequencies (CAP21), Scapin (Pitt Rep) and a reading of the new musical, Tell Tale Heart (Vassar College). Other prior experience includes working for a bi-coastal talent agency, for several casting directors, and in the offices of the world-renowned Nederlander Organization. As a performer, Tom has toured with national companies of Crazy for You, West Side Story, The Wizard of Oz and White Christmas; he has numerous regional and stock credits and has performed in The Radio City Christmas Spectacular. He holds an MFA in Performance Pedagogy from the University of Pittsburgh and a BFA in Acting from NYU’s Tisch School of the Arts. 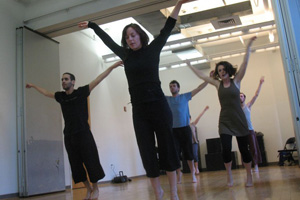