The full-time conservatory programs are the heart and soul of the Stella Adler Studio, the culmination of Stella’s vision for complete acting training. Since 1949, the Professional Conservatory has trained some of America’s most important actors and is considered one of the best in the nation. In these programs modeled after MFA graduate-level training, students gain tools and techniques to better engage their imagination, to analyze text deeply and accurately, and to create rich, specific characters; while also preparing for the creative challenges of the New York and Hollywood industries in Film, Television, and Theater.

APPLY ONLINE! Apply online using the Stella Adler Online Application Portal. Video auditions can also be submitted with this feature if you cannot audition in person.

Begins September 2, 2020
Price: $8,200 per semester
The 3-Year Conservatory is original conservatory program founded by Stella Adler in 1949. It is modeled after the top graduate-level MFA programs in the nation and is taught by a world-class faculty. It is the most rigorous conservatory with thirty hours a week of classes over three years of investment into the art of acting for both stage and screen.
LEARN MORE

Fall Start Session: Begins September 8, 2020
Price: $6,000 per semester
The Evening Conservatory is a cohesive and intensive two-year program with twenty hours a week of training. It is held in the evenings so actors can keep their daytime hours free and prepares artists for the creative challenges of the acting profession by providing a solid craft that guarantees continued growth, not only as a creative artist but as a human being.
LEARN MORE

Begins January 21, 2020
The Professional LA Conservatory is the apex of all training programs at the Art of Acting Studio. In this exclusive program students learn tools and techniques to better engage their imagination, to analyze text deeply and accurately, to create rich, specific characters, to engage the body and voice fully and to work professionally and creatively on both stage and screen.
LEARN MORE 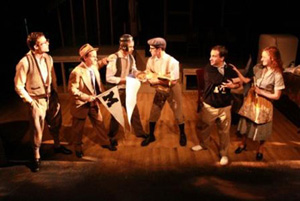