All workshops will not meet the week of Spring Break, March 16-22.

Invite Required
10 WEEKS, $700
THURSDAYS, MARCH 5 – MAY 14  from 7pm – 10pm – WAIT LIST
This Stella Adler® program is a deeper investigation of the concepts introduced in Acting Technique I, including action, circumstance, and justification, rooted in the power of the imagination. Actors will strengthen what they have learned in Acting Technique I through more advanced exercises developed by Stella Adler.
INSTRUCTOR: Patrick Quagliano

10 WEEKS, $725
Option 1: TUESDAYS, FEBRUARY 4 – APRIL 14 from 7pm – 10pm – WAIT LIST
Option 2: SATURDAYS, FEBRUARY 8 – APRIL 18 from 12pm – 3pm – WAIT LIST
This intermediate level class is an “immersion” experience in the techniques necessary to work in feature film as well as in television dramas and comedies. Students will learn to memorize scripts quickly, relax in front of a camera and “find themselves” in the roles they are playing; three skills necessary for success in feature film and television performance. This is not a class for beginners, previous actor training required.
INSTRUCTOR: Alberto Bonilla
schedule an interview

10 WEEKS, $700
Option 1: MONDAYS, FEBRUARY 3 – APRIL 13 from 7pm – 10pm – WAIT LIST
Option 2: THURSDAYS, FEBRUARY 6 – APRIL 16 from 7pm-10pm – WAIT LIST
This class is a combination of fundamental acting exercises and scene study designed to establish a strong foundation for each actor. Actors will learn to develop character through actions and objectives drawn from the text.
INSTRUCTOR: Jon Korkes
schedule an interview

Invite or Audition Required
10 WEEKS, $700
WEDNESDAYS, FEBRUARY 5 – APRIL 15 from 7pm – 10pm – WAIT LIST
This class moves beyond the fundamentals of Scene Study I. It is devoted entirely to contemporary scene work and provides a greater variety of characters and situations that take the actor’s skill to a higher level.
INSTRUCTOR: Jon Korkes

Invite or Audition Required
10 WEEKS, $700
MONDAYS, FEBRUARY 3 – APRIL 13 from 7pm – 10pm – WAIT LIST
This intermediate scene study course is designed for the actor who has a basic technique, but is seeking a stronger foundation.  Actors will analyze the text, the concept of active personalization, the specific creation of a character, emotional accessibility, and the ability to act on impulse with imagination and heart.
INSTRUCTOR: Paul Takacs
schedule an audition

Invite or Audition Required
8 WEEKS, $600
– CANCELLED
This is a high-paced master class for working professionals and graduates to continue their artistic growth as they pursue their careers. Work on scenes, monologues and cold readings with Master Teacher Sam Schacht, former dean of The Actors Studio Drama School.
INSTRUCTOR: Sam Schacht
schedule an audition

Audition Required
8 WEEKS, $600
THURSDAYS, MARCH 5 – APRIL 30 from 1pm – 4pm
This advanced level scene study class synthesizes contemporary scene work with technique exercises that explore the language and principles of Stella Adler’s approach to acting, including action, circumstance, and justification.  Students will learn how to “put it all together.”
Instructor: Patrick Quagliano
schedule an audition

4 WEEKS, $350
SATURDAYS, MARCH 21 – APRIL 11 from 1pm-4pm
Taught by VO Instructor Bruce Kronenberg, Voice Over 101 is the most comprehensive voice over training you can get in New York City.  Covering every genre of VO (Radio Commercials, Television Commercials, Audiobook and Narration and Animation), learn how to use your new skills to make money.  The final class covers the Business of the Voice Over Business.
Students receive MP3 files of their weekly work.
INSTRUCTOR: Bruce Kronenberg
schedule an interview

8 WEEKS, $525
SATURDAYS, FEBRUARY 15 – APRIL 11 from 12pm – 3pm
This class is a unique hybrid of voice and speech, language and text, and acting technique. One hour of voice exercises, followed by two hours of monologue work. Each actor will leave the class with fully realized, contrasting classical & contemporary speeches to add to their monologue portfolio.
INSTRUCTOR: Joe Goscinski
schedule an interview

8 Weeks, $995
For Ages 14-18
Saturdays from 10am-6pm
FEBRUARY 15 – APRIL 11, 2020
In the fall and spring, the studio offers a conservatory program for teens on Saturdays. This all-day intensive is structured to suit both the emerging and professional young actor, and is designed to introduce the acting technique developed by Stella Adler.
Visit the Teen Classes Page to Learn More and How to Apply 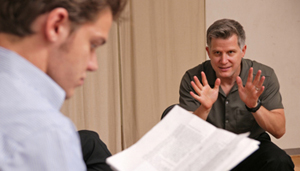